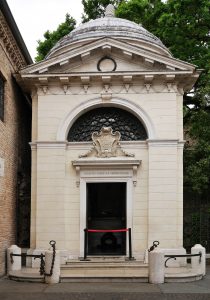 Ravenna, one of the unique city in the world, that inspired Characters like Dante, Boccaccio, Byron and Klimt, it was the last capital of the western Empire during the fifth century. Throught the ages it has played a leading role in European history: chief city in the Roman-Barbarian kingdom under Theodoric the Goth, than the seat of the Exarchate after being re-conquered by the Eastern Empire.

Bear witness to its role as political, commercial and artistic centre, of a succession of different civilizations, the extraordinary complex of basilicas, baptistries and mausoleum with the magnificent splendor of precious marbles and rich Byzantine mosaic decorations. Side by side with these the architectural heritage of the period of Venetian dominion, 15th century, the Dantesque area and Dante’s tomb, Anita Garibaldi’s hut and recently opened to the public the “palazzo del Mutilato”, where you can admire the mosaics made in the yaers ‘40, having a cup of tea or coffe in the bar inside and where you can make guided tours by
reservation. 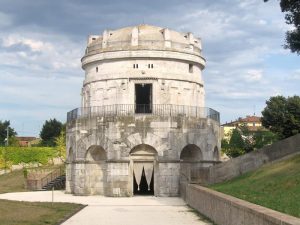 Ravenna is recognised by UNESCO as a World Heritage Site with 8 monuments added in the list, all datingback to the 5th century: Basilica of San Vitale, Musoleum of Galla Placidia, Baptistery Neonian and Arian, Mausoleum of Theoderic, Basilica of Sant’Apollinare Nuovo and Basilica of Sant’ Apollinare in Classe.
But you can’t forget the remains of the ancient port of Classe, the Classense library, the Basilica of San
Giovanni Evangelista….
Ravenna is a city rich of history and culture but it also offers fun as Mirabilandia, the sea, the pine forest, valleys and trips that you can do even in one day at Venezia, Bologna, Ferrara, Firenze, Rimini.

In summer the famous Ravenna Festival, the “all open” on Tuesdays and Fridays evenings. And don’t forget to taste Cappelletti, Piadina and Squacquerone with caramelled figs…

We will be here waiting for you to offer you the well deservd rest after your holliday efforts!